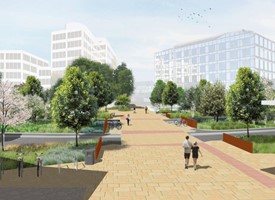 Plans for a new bus boulevard on Fleming Way were announced by the council with the aim of making the connection between the town centre and the train station stronger.

This development brings with it the potential that future investment will be drawn to the area, evidenced already by Zurich, one of the major employers of Swindon, who have credited the improvement as a ‘key consideration’ when choosing the land adjacent to Fleming Way for their new HQ.

Swindon’s commitment to creating strong connections between different areas of the borough is evident in the plans with consideration of public open spaces for environmental impact, as well as cycle routes and pedestrian crossings allowing the journey between town centre and the train station to become more easily accessible.

The new boulevard, funded by multiple initiatives including £3 million from SWLEP, is to accommodate all national and local bus services, driving connections both within the region and outside too.

The scheme is projected to be completed in 2024, bringing with it the promise of reconnection, green investment, and the revitalisation of an older part of Swindon.